On July 20, 2017, the US Department of Labor announced plans to rescind regulations limiting which staff members restaurant owners could include in tip pooling arrangements.  Under the previous 2011 stipulation, “back of the house” employees such as cooks and dishwashers, could not participate in employee tip pools.  The restriction even encompassed tip pools for restaurant employers who did not take advantage of tip credits (permitting them to pay waitstaff and others a federal minimum wage of at least $2.13/hr with certain provisions) and instead elected to pay all of their staff members a full minimum wage.

The 2011 regulation in its entirety read as follows:

Whether a tip is to be given, and its amount, are matters determined solely by the customer, who has the right to determine who shall be the recipient of the gratuity. Tips are the property of the employee whether or not the employer has taken a tip credit under section 3(m) of the FLSA. The employer is prohibited from using an employee’s tips, whether or not it has taken a tip credit, for any reason other than that which is statutorily permitted in section 3(m): As a credit against its minimum wage obligations to the employee, or in the furtherance of a valid tip pool. 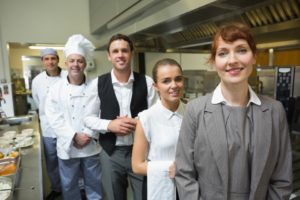 Those in favor of the tip pooling restrictions argue that customers believe they are tipping a specific employee directly based on his/her service and attentiveness.  While those against it, suggest that all members of a restaurant including the “back of the house” have an impact on the service provided to the customer and thus by sharing tips with all those in the line of service, it promotes greater teamwork.  Broader tip pooling arrangements also benefit upscale restaurants in their ability to attract top chefs and other kitchen talent by offering more competitive pay and a direct opportunity to profit from the additional business they generate.

The Department of Labor was required to file its brief supporting its call to roll back the tip pooling constraints by September 8, 2017.  While this case runs its course, which could take up to a year to finalize, DOL investigators are prohibited from enforcing the 2011 regulations, though they still remain in effect.

Regardless of the final outcome, employers should also be aware of any state laws regulating tip pooling as well as tip credits.  New Hampshire recently passed legislation that went into effective on September 3, 2017, adding language to its tip pooling law that permits an employee to voluntarily contribute a portion of any tip pool to any employee regardless of job category.